You can cook meat a number of different ways, from roasting to pan-searing to barbecuing. However, there are five basic principles that apply to the vast majority of techniques when it comes to meat and poultry. Here’s what we’ve found after years of cooking.

This post originally appeared on The Feed by America’s Test Kitchen.

1. Use High Heat to Develop Flavor 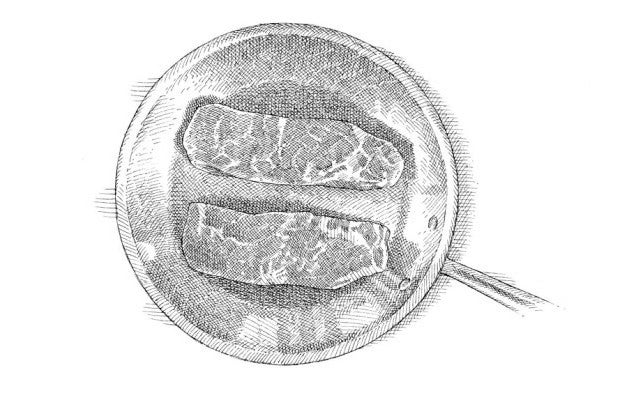 Browning creates a tremendous amount of flavor and is a key step when cooking meat. This happens through a process called the Maillard reaction, named after the French chemist who first described it in the early 1900s. The Maillard reaction occurs when the amino acids and sugars in the food are subjected to heat, which causes them to combine. In turn, hundreds of different flavor compounds are created. These compounds break down to form yet more new flavor compounds, and so on, and so on. When browning meat, you want a deep brown sear and a discernibly thick crust on all sides—best obtained by quick cooking over high heat.

To ensure that meat browns properly, first make sure the meat is dry before it goes into the pan; pat it thoroughly with paper towels. This is especially important with previously frozen meat, which often releases a great deal of water. Second, make sure the pan is hot by preheating it over high heat until the fat added to the pan is shimmering or almost smoking. Finally, make sure not to overcrowd the pan; there should be at least 1/4 inch of space between the pieces of meat. If there isn’t, the meat is likely to steam instead of brown. If need be, cook the meat in two or three batches.

2. Use Low Heat to Preserve Moisture

For large cuts of meat or poultry, we often advocate a low-and-slow cooking method. We find that this approach allows the center to come up to the desired internal temperature with less risk of overcooking the outer layers.

An experiment we recently conducted proves that even cooking isn’t the only benefit of slow roasting: It also helps minimize the loss of flavorful juices (and fat). We took two 6‑pound rib roasts and roasted one at 450 degrees and the other at 250 degrees until each was medium-rare. We then weighed the cooked roasts. The slow-cooked roast had lost about 9.25 percent of its starting weight, while the high-temperature roast had lost nearly 25 percent of its original weight. Why the difference? Proteins shrink less and express less moisture and fat when cooked at moderate temperatures than when roasted at high heat. Cooking at the wrong temperature is a common mistake.

3. Match the Cut to the Cooking Method 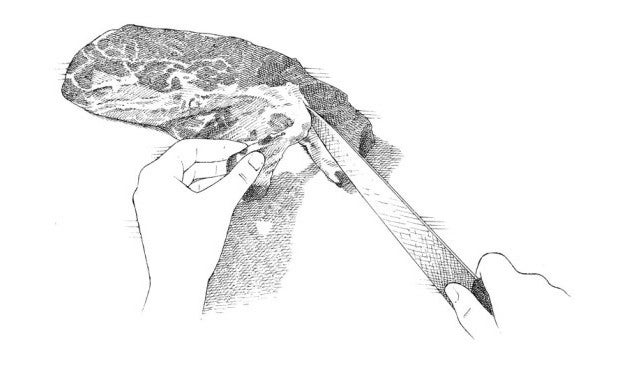 Tough cuts, which generally come from the heavily exercised parts of the animal, such as the shoulder or rump, respond best to slow-cooking methods, such as pot roasting, stewing, or barbecuing. The primary goal of slow cooking is to melt collagen in the connective tissue, thereby transforming a tough piece of meat into a tender one. These cuts are always served well done.

Tender cuts with little connective tissue generally come from parts of the animal that receive little exercise (like the loin, the area along the back of the cow or pig). These cuts respond best to quicker, dry-heat cooking methods, such as grilling or roasting. These cuts are cooked to a specific doneness. Prolonged cooking increases moisture loss and can turn these tender cuts tough.

Since the temperature of meat will continue to rise as it rests, an effect called carryover cooking, meat should be removed from the oven, grill, or pan when it’s 5 to 10 degrees below the desired serving temperature. Carryover cooking doesn’t apply to poultry and fish (they don’t retain heat as well as the dense muscle structure in meat). The following temperatures should be used to determine when to stop the cooking process. 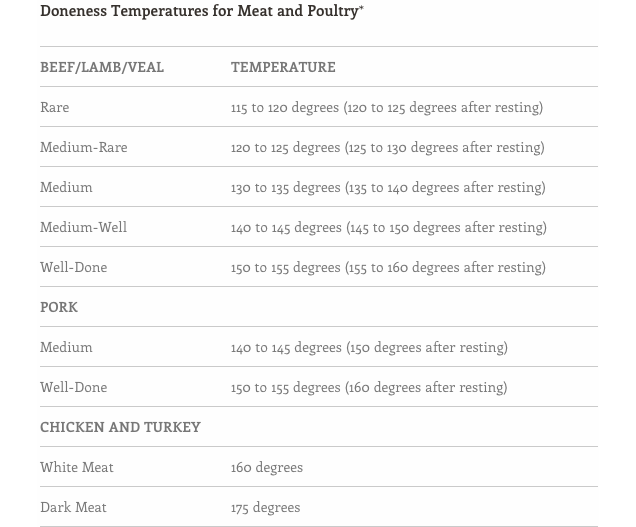 The purpose of resting meat is to allow the juices, which are driven to the center during cooking, to redistribute themselves throughout the meat. As a result, meat that has rested will shed much less juice than meat sliced straight after cooking. To test this theory, we grilled four steaks and let two rest while slicing into the other two immediately. The steaks that had rested for 10 minutes shed 40 percent less juice than the steaks sliced right after cooking. The meat on the unrested steaks also looked grayer and was not as tender. A thin steak or chop should rest for 5 to 10 minutes, a thicker roast for 15 to 20 minutes. And when cooking a large roast like a turkey, the meat should rest for about 40 minutes before it is carved.

Now that you know the basic principles, try applying them to one of America’s Test Kitchen’s recipes, like Pepper-Crusted Beef Tenderloin Roast. It’s easy to make—just oven-roast it until it’s done—and, as the absolute most tender cut of beef, it’s luxurious to eat. They boosted the flavor with a crunchy peppercorn crust.